By Kaladi Coffee August 20, 2019 Food For Thought
No Comments 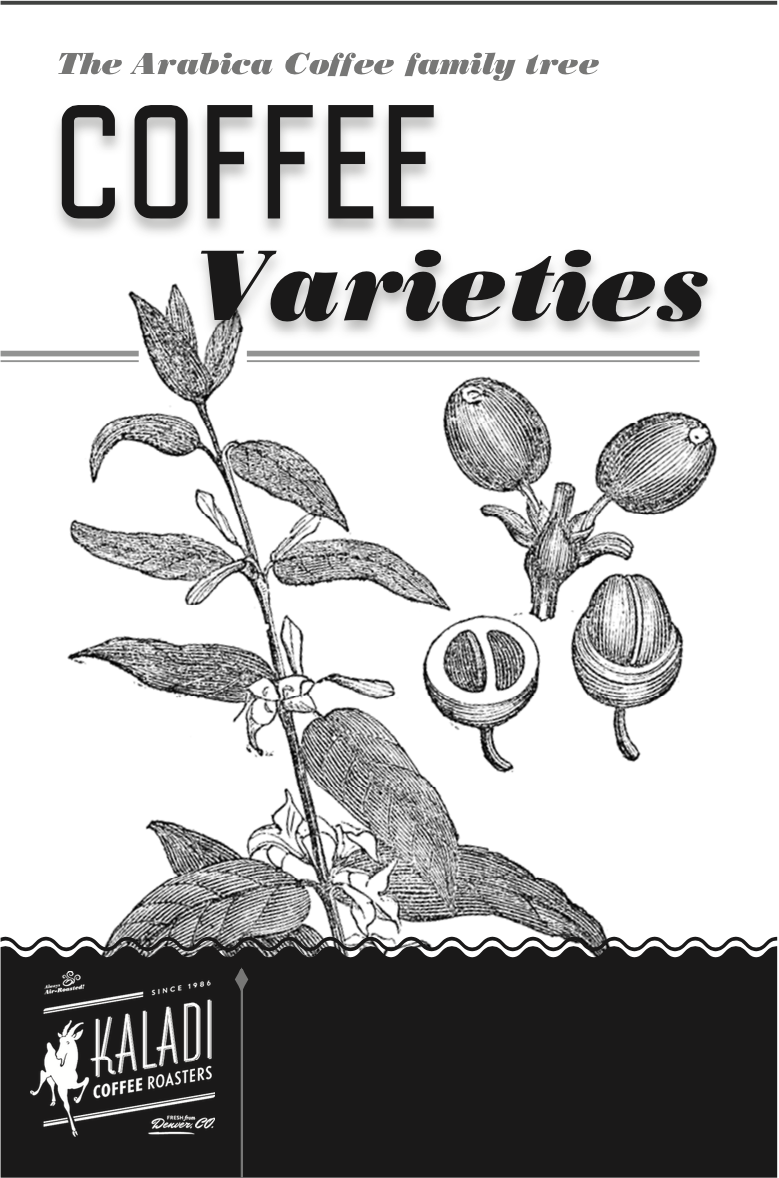 The coffee tree comes from a large family of evergreen shrubs so to call it a tree may be somewhat of an exaggeration. For much of coffee’s recent history, the species and variety of the tree was chiefly a concern of the coffee farmer’s efforts to combat disease and pests along with increasing crop yields. Recently, coffee roasters have taken an interest in coffee varieties for a very different reason: marketing.

Coffee originated in Ethiopia, but it was in neighboring Yemen that Turkish farmers first cultivated it on a commercial scale. Undoubtedly, the Turks could have selected any number of species and varieties to plant, but the one they chose was most likely for its fine flavor since there were other hardier, and greater producing species to be found.The Turks closely guarded their treasure, and how seeds were finally secreted away is a source of legend.This species of coffee took its name from whence it came: Arabia; taking on the nomenclature Coffea Arabica, which today accounts for 80% of the world’s production.

The spread of Arabica coffee around the world was based on a very limited number of trees. Seven berries were taken by Baba Budan to India; a small shipment was taken to the French colony of Reunion; and the tree taken from Java to Amsterdam in 1706, together with its offspring in Paris, which provided all the planting material for South and Central America. Consequently, the genetic base of the Arabica coffee industry is very narrow.

As demand for coffee grew, large areas and sometimes entire countries became dedicated to coffee production, revealing weaknesses inherent in propagating a single species. Since the coffee has broad leaves, it is a tempting target for pests and disease. This became glaringly clear in Sri Lanka, once one of the world’s largest producers; they lost their entire crop to disease in the late1800s and never recovered.

Experience has led farmers to undertake inbreeding to increase resistance and boost crop yield. Since the coffee tree was inbred, natural mutations occasionally occurred. These mutations often allowed them to adapt to specific growing conditions. Inbreeding has led to a number of hybrids of the Arabica species that are referred to as varieties or cultivars.These cultivars all come from the original Typica variety fromYemen and the Bourbon variety from the Reunion.The two varieties are considered identical from a herbarium perspective. Hybrid varieties have become so popular that in many countries they greatly outnumber the original Typica and Bourbons and, in some cases, have completely replaced them. For the most part, coffee connoisseurs were quite unaware of this change until recently.

Hybridization began in earnest after World War II as part of the “Green Revolution” that occurred throughout the world’s agricultural industry.This movement was characterized by a change in growing practices that increased production and simplified labor practices through mono-cropping and heavy use of fertilizer and pesticides. Since coffee contributes significantly to the GNP of many nations, government-sponsored research groups were created to assist farmers in the latest methods of what came to be known as technified farming. Technified farming encouraged the removal of traditional multi-story shade canopies in favor of specialized shade or full sun growing techniques. A new form of hybrid propagation was encouraged to combat disease and pest outbreaks due to intense mono-cropping.

This new hybrid is referred to as interspecific hybrids. Interspecific hybrids are cross bred from outside the Arabica species, most notably the Robusta species.These hybrids display negative taste characteristics that are quite recognizable to the trained coffee professional.The success of interspecific hybrids may have increased yields and forged a (temporary) bulwark from disease and pests, but many pros within the coffee industry believe this success has come at a cost to flavor quality.

The confusion between inbred cultivars and interspecific hybrids has led to a resurgence of interest in specific varieties and what some call the heirloom varieties of Bourbon and Typica. Beyond that, however, hybrids within these two varieties become a red herring to flavor quality. Ultimately, flavor quality depends on microclimate variables, ecological stewardship and processing methodology.

As a fashionable method to display their commitment to quality, some roasters promote particular varieties.What is important to remember, however, is the extreme narrow genetic base for the Arabica species makes taste variation negligible. It is difficult, if not impossible, to distinguish a flavor variance between the Typica and Bourbon variants, much less variants within cultivars. Any perceived taste variation is more likely resulting from external variables.