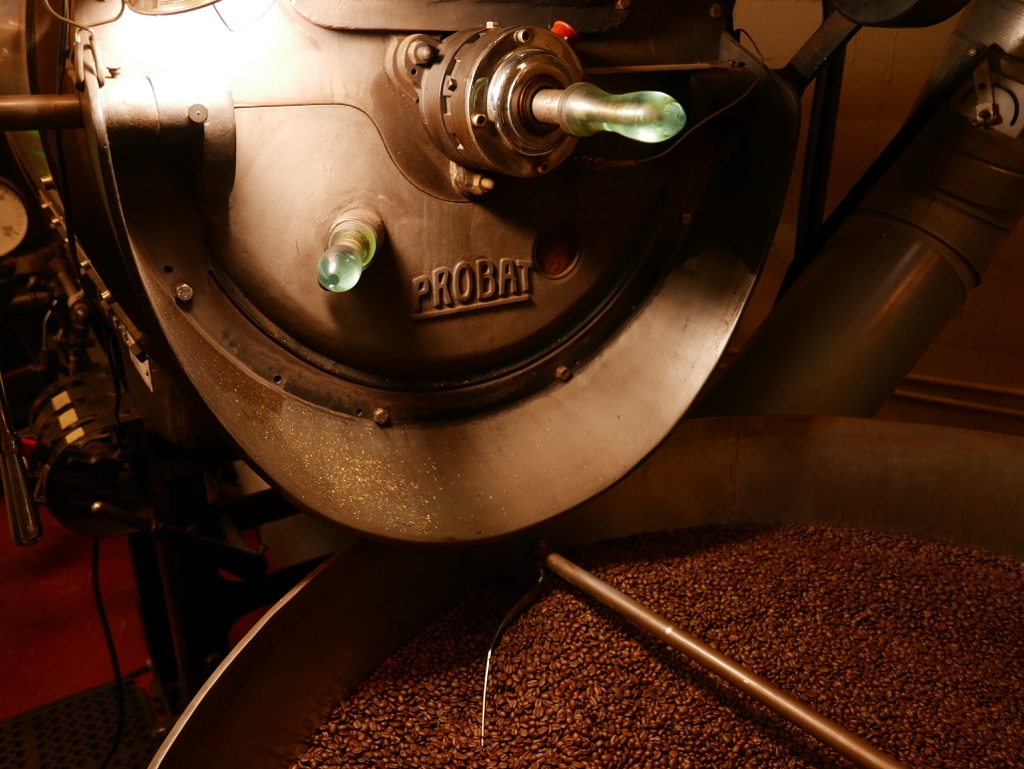 While coffee has been around for centuries the act of buying roasted coffee did not come about until the mid to late 1800’s. This was because the buying of green, unroasted coffee was the only way to ensure you were getting only coffee and not coffee mixed with cereal substitutes. There were many devices available to roast coffee beans at home; a job that typical fell to the children of the household. It was a hot, smelly job consisting of holding a pan-like enclosed skillet over the fire while rotating the beans within.

“Coffee roasting is essentially a process of exposing the green coffee beans to a warming process that is sufficiently fast to drive off the free and bound moisture of the bean and the dried bean residue is heated to more than 400 F. At about this temperature, pyrolysis, or thermal decomposition and chemical change, occurs within the bean.” -Sivetz, Coffee Technology

Laws guaranteeing roasted coffee purity opened the stage for the transfer of roasting in the home to factory roasting. These laws were first enacted in Germany in 1875 and as a result many of the earliest industrial size roasters began there. These early roasters were simply large cylinders placed over a heat source. The main problem was emptying and cooling the coffee beans. The American Carter Roaster of 1846 allowed the entire cylinder to be pulled out of the flame and doors mounted on the drum walls allowed the coffee to be dumped onto the floor or into trays to cool.

In 1864 Jabez Burns of New York introduced a roaster with two main improvements. The first was an opening mechanism to empty the beans without removing the cylinder from the flame and the second was a double screw inside the cylinder that would evenly distribute the beans. They would later invent add a cooling tray to the front of the roaster with a fan mounted below to draw air through the just emptied beans. The modern roasting machine was beginning to take on a recognizable shape.

Beginning in the early 1880’s manufacturers began experimenting with introducing hot air into the roasting cylinder to take away some of the smoke and gasses. The German manufacturer Van Gulpen introduced a roaster with an exhauster to draw the hot air through holed walls in the drum or through the drum from one end to the other. It also featured a fan that delivered fresh air to the beans while roasting, representing the biggest change in coffee roaster design. From this point forward coffee roasters went from being closed cylinders to keep the air out to vented cylinders to let air. The Probat roaster took its name from one of these Van Gulpen models.

In 1889 Carl Salomon of Braunschweig introduced the principle of hot gas ventilation and with it quick roasting. He determined the number of revolutions needed per minute so that the beans would tumble off the wall into the hot air stream being blown into the roaster. As a result roasting times fell to around twenty minutes. By the early 1890’s many other manufacturers followed suit, making improvements with their own designs. For nearly the next hundred years all roasting machines would employ some variation to this design. Cylinder roasters to this day employ one of two basic design modes: one using heat under the drum and sucked through holes at the end of the drum, and two, using hot air blown directly into the drum:

As Ian Bersten notes in Coffee Floats, Tea Sinks: “The conventional coffee roaster is operated by combining the mechanical movement of the beans with a hot air stream. All conventional coffee roasting machines can be classified according to whether the drum is singe or double-walled or even perforated, whether the heat is direct of indirect against the drum, or hot air direct into the drum, or even a flame on the drum.”

Mike Sivetz was not the first to devise the fluid-bed roaster, an electric version designed for storefronts appeared in 1926. In 1954 the Aerotherm Roaster was introduced by the Lurgi Company blowing air straight up through the bean mass. Due to design limitations the roaster was considered too small for commercial applications and required a high degree of attention monitoring the airflow so that the beans would not blow out the top.  It would not be until 1976, when Mike filed patent for his roaster that a practical fluid-bed roaster would become available.