(Coffee) staling is defined as the loss and alteration of the volatile aroma constituents.

When it comes to preserving coffee’s freshness, there is a lot of conflicting information on how best to maintain that just roasted flavor. For many years keeping coffee beans in the freezer was known to be an effective way to preserve the fleeting aromas of freshly roasted coffee. In recent years, however, many “experts” have challenged this view, some even suggesting that freezing may actually harm coffee’s flavor. For quality-conscious coffee consumers, this has led to great confusion.

The roasting of coffee beans causes a large number of chemical changes to occur. Depending on the degree of roast, two “thermal bumps” impact the beans while roasting. These bumps, or “cracks” as they are commonly referred to by roast-masters, determine the roast profile of the coffee. The first crack occurs as the water molecules vaporize from the bean. Ending the roast at this point is commonly considered a light roast. This roast style is characterized by acidic compounds and its flavor is usually described as fruity. In some cases, depending on the roasting device, these coffees can be excessively acidic, becoming more palatable in a specific time after roasting. When roasting to second crack, often referred to as dark roast, pyrolysis occurs as the chemical decomposition of sucrose. It is this pyrolysis reaction that forms the appealing aromas in coffee, whose presence and stability is so fleeting.

The composition of these aromas consists of aldehydes, ketones, and ethers, along with carbon dioxide gas. Additionally, vegetable oil and glycerol are volatilized from the bean. While CO2 does not contribute to coffee’s flavor, its rate of dissipation coincides with the other volatile compounds in the bean. To date, more than 660 volatile compounds – collectively referred to as the volatile aroma constituents – have been identified in coffee, and their presence and rates of dissipation have been long studied. As these volatile aromas dissipate, the flavor of coffee diminishes and oxygen causes the vegetable oils to turn rancid, further altering the flavor of coffee.

It is important to recognize that these compounds are created by temperature and released through temperature. (This is why hot water is used to brew coffee and why steeping coffee in cold water yields poor results in flavor.) The longer coffee beans are exposed to higher temperatures, the faster the release of the volatile compounds. At room temperature the compounds in second-crack roasted coffee become largely absent in 7 to 10 days when exposed directly. Without any form of preservation, coffee beans are moderately stale in a week, more stale in two weeks, and quite stale in three weeks.

Since the advent of selling commercially roasted coffee beans directly to consumers, stale coffee has been a constant issue. Most efforts to preserve coffee’s flavor centered on packaging that provided an oxygen barrier to the beans. However, roasted and ground coffee sealed in cans must “de-gas” for several hours before packaging otherwise the can integrity is compromised resulting in stale, flavorless coffee. Most “specialty” coffee is package in sealed plastic or foil laminate bags with a one-way valve that allows the gasses to slowly release. This only provides a partial solution, as it does not preserve the coffee’s aroma – it merely slows oxygenation.

Just as exposing the beans to a higher temperature accelerates the release of gases, lowering the temperature slows the rate of dissipation. Freezing coffee to -10F or -20C is a proven effective way to extend the intensity of coffee’s aroma constituents. The volatility is reduced by about four-fold, and rates of oxidation are reduced by about 50% for each 10C reduction (roughly fifteen-fold). Additionally, the vegetable-like oil congeals, reducing the movement of volatiles within the beans from convective rates to diffusional rates. Finally, freezing immobilizes water molecules, thus reducing their reactivity. This is especially important for consumers living in high-humidity environments, as coffee beans are hydroscopic, and rapidly absorb environmental moisture.

However, the above discussion assumes that the coffee is fresh to begin with. If the coffee is not fresh when purchased it does little good to preserve what no longer exists. Our commitment to quality dictates that preserving coffee’s freshness begins with us. We freeze all of our coffee shortly after roasting, sealing in all the best components of that just-roasted flavor. 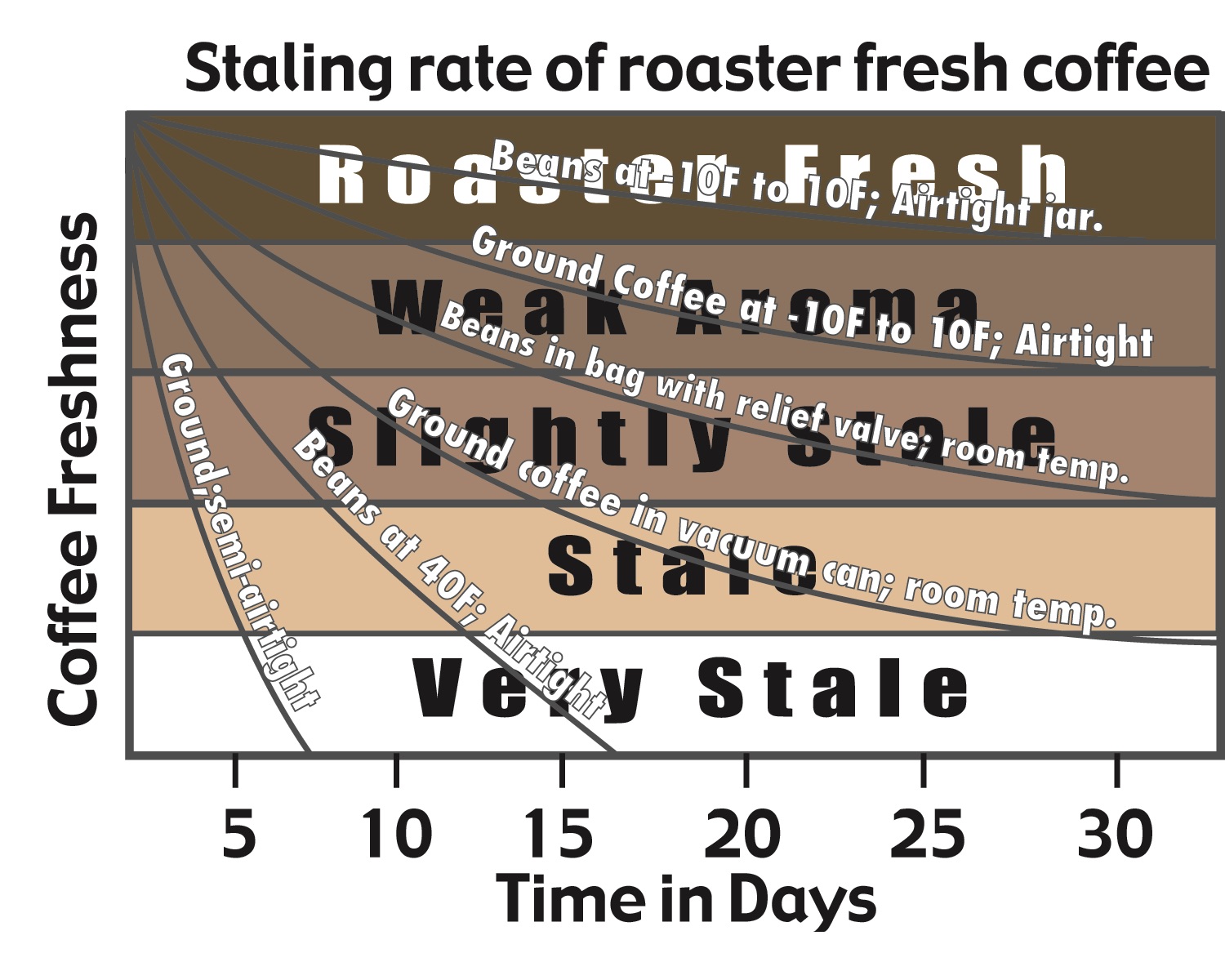 The graph depicts the staling rate of roaster fresh coffee. Other variables affecting coffee freshness not depicted on this graph are the particular blend, the degree of roast, the addition of moisture, the humidity of the storage area, the rate of circulation, the altitude, etc.

Most packaged roasted beans and grounds as sold in the USA do not preserve the aromas and tastes developed at the time of roasting, which sensual properties the consumer wants.

The reasons for this are several, and their deficiencies are varied, as will be explained.

In order to know how far packaged coffee tastes differ from that of freshly roasted beans, one has to be able to distinguish fresh roast from various stages of staleness. In other words, one needs an objective scale on subjective taste impressions.

Because tasting is a subjective testing method does not mean that a freshness scale cannot be established. In fact such a scale can be made using a group of qualified tasters.

The qualified tasters cannot be “off the street”, they need to have a reasonable amount of pertinent taste experiences in the coffee trade over at least several years, and their judgments need to be in harmony with the others by and large. This is not a place for mavericks or people who have an agenda that biases their taste impressions, and believe it there are people in the trade with biases of various sorts.

Tasting “freshness” is of course influenced by the green beans used, the type and degree of roasting, the kind of grinding, and the time frame from roasting to cupping, and the manner of cupping. For example, on the latter point, I prefer to do taste comparisons on beverages as they would be prepared in a cafe, not as many do like cupping evaluations on green coffee purchases.

The different tastes from different origins are diminished rapidly from the time of roasting. Note that the easily differentiated tastes just after roasting are not available to the consumer from his packaged coffees. So offering a dozen, or more choices, does not offer distinguishing tastes, which only are revealed “just” after roasting, and constitutes a consumer fraud.

What is it chemically that exists just after roasting, that does not survive packaging and time?

This is a complex situation, but can be illustrated as follows.

Most of the aromatic chemicals are aldehydes, and they can be rapidly oxidized in air.

Just roasted coffee beans when sealed in a chamber release their aromatics and carbon dioxide gas within 3 days and the taste changes can be followed by cupping each day.

The sealed chamber pressure rises to about 30 psig or 2 atmospheres from atmospheric, and if the chamber is highly evacuated initially to more than l atm or more than l5 psig. Because in the USA, most roast coffees are sold as grounds in evacuated thin walled metal cans, the coffee industry in the l930’s, made a decision to only use a 90% vacuum (2l x 0.1 = 2.l% oxygen) in can as a practical packaging matter, which was not consistent with retaining the most freshness possible, but was a compromise favoring the cost of said vacuum can closing machinery and their considered taste acceptance at that time.

In fact, these machines did not attain 2 % oxygen, but realistically at best only delivered 3 % oxygen in the can. And as the years went by, and that canning-evacuation machinery wore, 4% OXYGEN was not uncommon.

This vacuum canning machinery was very expensive, as were the operating costs for the vacuum pumps.

Of course, 3 to 4% oxygen was better than 2l% oxygen, but as everyone knows, canned R&G coffees never tasted like freshly roasted beans.

What everyone did not know was that roasted coffee aromatics and the beans themselves reacted with the oxygen residual in the can in hours.

Further, in the largest roasting, grinding, packaging firms, there always was several hours, holdup of the just roasted beans, before grinding, and indeed, most processors held the just roasted beans overnight to degas the carbon dioxide gas coming off, and usually in bins that had air entering. Therefore, not only was CO 2 leaving simultaneously with the desirable aromatics but also oxidation was occurring in hours. This has been and is today the way roasted coffee beans are processed. In other words, the roast beans and grounds are undergoing noticeable aroma and taste degradation before they are ever packaged.

It has been only since about l980, when there occurred a large growth in the specialty coffee business, where hundreds of local roasting operations came into being, that the consumer was able to buy and taste “just” roasted coffee beans, and a new yard stick in coffee freshness started to be established.

This local roasting was accompanied by the use of “valve” bags, which allowed the CO 2 gas to leave the bag (with aromatics) while not allowing oxygen into the bag.

A small vacuum, like l0% leaves over l8% oxygen in the bag, but the bag shrinks over the beans, and gives a positive visual impression. The appearance of the shrunken bag is not much different with a l5% vacuum or a 90% vacuum, but the oxygen levels are quite different.

Unfortunately most roaster/packagers don’t know this. They don’t own an oxygen analyzer; hence, they do not know what their vacuum-bag sealer is in fact accomplishing.

They are paying tens of thousands of dollars on, e.g. nozzle evacuating and inert gas purging machines and are getting very high oxygen residues in the bag.

For these reasons, much of what is being packaged is not low oxygen in the bag, and the roaster/packager claims for protecting freshness for months are unjustified.

Interestingly enough, the manufacturers and distributors of these machines don’t even follow-up on the use of their machines, and I’ve seen bags being sealed at l/2 Atm vacuum which is over l0% oxygen, as a considered normal.

I’d like to point out two important ways to preserve fresh roast aromas and tastes:

l) If the residual oxygen in the valve bag is taken to less than l %, but preferably down to a few tenths of l % oxygen, a better tasting coffee with longer shelf life will occur. Note that even though we are working in a small area like 0.l and say 3% oxygen, it is this window that highly influences what kind of aroma and taste will result in days & weeks. The current industry goals of a l year shelf life in cans is a poor standard based on a very low taste acceptance, by conditioned consumers in a market based on low prices and not top fresh quality. The marketing of valve bagged coffees, preferably in bean, has some added advantages in that the time frame is less, possibly 2 to 3 months.

2) By placing freshly roasted beans in a hermetically sealed container, can or bag, with or w/o low oxygen packaging at less than -l0 F in a commercial freezer, will stop the release of CO 2 gas as well as aromatics, and stop any chemical reactions therein, and the fresh roast flavor is largely preserved, as verified by taste tests. This condition begs for selling the roasted beans out of freezers, which is simply a marketing method not yet applied on a large scale. From a quality preservation point, it has been proven on a small scale. It is also the method to use when making taste comparisons with aged and oxidized beans.

Machinery is available to achieve such preservations today.

As consumers become educated to the pleasures of freshness, those processors who deliver that freshness will gain market share. If consumers remain uneducated, they will simply buy the poorer tasting products based on price, a 2 tier market.